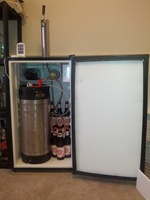 I brew my own beer and rarely brew the same batch twice, because I enjoy trying new beer. I also change recipes to fit my palate. I mainly brew mini-mashes due to having only a 5 gallon boiling pot. I store my beer in Cornelius soda kegs. I also built my kegerator to keep these kegs cool and make them look nice during despensing. 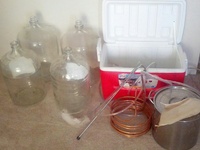 I like to run six and a half gallon carboys, so when it burps, it doesn't get everything messy. I built a submersion chiller for my wart. I will eventually convert this to a cross flow heat exchanger.